It is amazing how much investment habits and fantasy sports can often align.

I have participated in rotisserie baseball since 1985 and fantasy football since 1990. While it is fun to construct these make-believe teams and compete among friends, I have also learned quite a bit about managing emotions, and also managing expectations, and how they apply to investment habits, through these games.

Allow me to set this scene:

At the end of March (before the baseball season begins), you have drafted (in your humble opinion) the best team in the league (on paper).

But we’re here in mid-June and your “great team on paper” is way out of contention. Every week it seems your team falls further and further behind. The pitchers can’t seem to get anyone out, the hitters are not producing any kind of statistics. You are so far out of contention, other teams are asking if you’ll consider selling players, so you can start building for NEXT year.

But you expected you’d win it all this year. 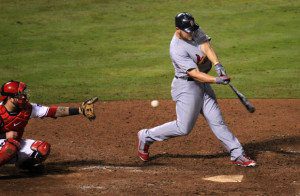 After another week of terrible stats, you decide it’s time to make changes. You sell off two of your big hitters who are struggling, along with a starting pitcher who can’t seem to throw strikes. At the draft, you selected these guys to be the centerpiece of your team. But it seems like these players are (instead) now weighing your team down! Week after week through April and May, they were NOT getting the job done.

So they were flipped for the hottest rookie around, getting hits galore, along with a pitcher who is suddenly striking everyone out.

Nice move? Fast forward to October, the end of the season.

After the season ends, the entire baseball community (players, media and fans) raves about the comebacks of the two hitters traded away in June. The pitcher who couldn’t throw strikes in the spring — straightened himself out in the second half. At the end of the season, the stats for these three players were precisely where they were projected to be.

Unfortunately, they were traded away. Tossed away before these three players could do the job they were hired to do.
And like they say on TV, “but wait, there’s more…”

That hot rookie you got in the deal? He broke his leg the week after you acquired him, and was out for the season. Tough break.
And the world discovers that pitcher who suddenly discovered the fountain of youth and was striking everyone out, was a steroid-abuser and busted in July for cheating.

The fantasy player wrecked his team, and destroyed his chances by being a little emotional, a little impatient.
Investors often do the same thing with their investments.

We get impatient. We make emotionally-charged decisions. We want to change our investment habits. Sometimes, after one quarter (three months) folks are ready to rip up their investments and move in a new direction. After two quarters (six months) of no action (or losses) some people want to change absolutely everything. It is very tempting to make changes, especially when it “appears” nothing is happening with your account. This can be a trap.

When I got started in the business (not that long ago, in the mid-1980’s), clients routinely would buy shares of stock. We would deliver their stock certificates a few weeks later through the mail. Clients used to use ledger paper or notebooks to track years and years of dividends and splits (I’ve seen the notebooks). They would keep their shares in a safe-deposit box at a bank.

That does not happen anymore. Investment habits have changed. Technically you can still buy stock (we do!), but it costs a small fortune to get the certificate printed and shipped to a client. Investors are now encouraged to leave the shares in their brokerage account. Pre-1985, having a client sell a stock was rarely heard back then. Think about the process: before the shares could be sold, the client had to go to the safe deposit bank, drive get over to the brokerage office, deposit the certificates and then wait (a few weeks!) for the shares to clear registration, before the shares could be sold. As a result, many people held stocks with enormous gains. But there was also plenty of wallpaper (worthless securities) too!

The volatile market environment we work in today only gets more jet fuel because it is so easy to simply dump whatever we feel is no longer working. People can now swipe an app on their cell phone and change their investments. Investments (for some) have adapted a “disposable” feel to them. This can be a trap.

That fantasy baseball player drafted those two stud hitters and the big-time pitcher because year after year they posted predictable stats. But when they got off to slow starts, the players were dumped. Maybe they were dumped in an effort to keep up with the rest of the league. Maybe they were dumped because the fantasy player felt they were no longer going to post predictable numbers. There was no “hard truth” — emotions overrode facts, and the players were dealt away.

There is so much overlap among investment habits and fantasy sports: human emotions (especially impatience) can lay a trap.