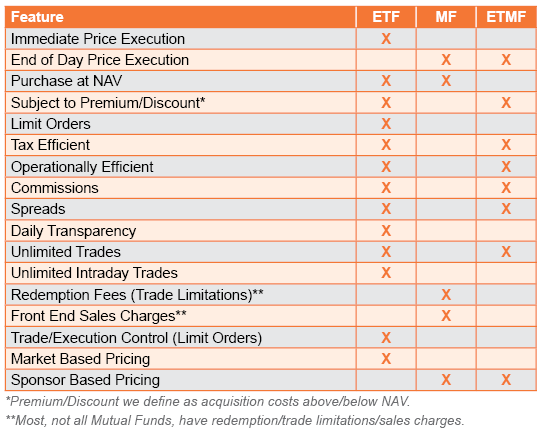 Back in September, Tom and Brendan discussed the industry push for nontransparent active ETF’s (https://mullooly.net/nontransparent-active-etfs/7641). Today they update the situation as it’s continued to develop. Eaton Vance received SEC approval to create an exchange traded managed fund or ETMF.

Eaton Vance, BlackRock, and State Street were among the investment companies who sought approval for a nontransparent active ETF earlier this year. While the SEC has allowed Eaton Vance to move forward with exchange traded managed funds, keep in mind that these are not ETF’s; they’re not mutual funds either. Exchange traded managed funds are a hybrid of the two, with characteristics of both ETF’s and mutual funds. The SEC was quite clear in their approval that Eaton Vance does not have permission to call or market this new creation as an ETF. This seems like a move to protect the integrity of a great and increasingly popular product in the ETF. For once, the financial industry is not going to allow the lines to be blurred.

What do we know about exchange traded managed funds so far?

ETMF’s will trade on an exchange making them more cost and tax efficient than mutual funds. This is a characteristic they share with ETF’s. However, orders will not be filled until the end of the trading day, like mutual funds. During the day investors will only be able to lock in their spread, not have their order filled.

Like mutual funds, exchange traded managed funds will not disclose their holdings daily. This seems like a deal breaker to us at Mullooly Asset Management. As we voiced on our previous podcast, we believe that increased transparency is good for the industry. Nontransparency was a sticking point for the investment companies seeking to create this product, and it will likely be the defining difference most investors recognize between ETF’s and ETMF’s. Time will tell which investors prefer (or if there’s room for both), but our guess is that they’ll continue heading towards more transparency – not less.

ETMF’s will be run mostly by active fund managers, like most mutual funds. This is, of course, different than most ETF’s which track indices.

An interesting point raised by Victor Reklaitis in a recent Marketwatch article is that:

“Investors aren’t clamoring for such funds. The push comes from the mutual fund industry, which has lost market share to ETFs.”

This is plausible and something to keep in mind regarding ETMF’s.

Exchange traded managed funds seem like a potentially interesting and more cost efficient alternative to mutual funds as we know them. However, they don’t really seem to challenge the growing ETF industry. ETF’s provide the liquidity, transparency, and low costs that we like to see.

Will exchange traded managed funds work out? Only time will tell, and they’re certainly something that we’ll be monitoring for our clients at Mullooly Asset.