Even in Good Years the Market Pulls Back 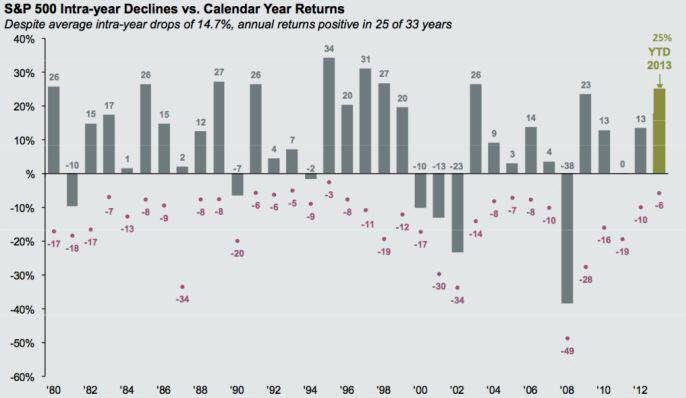 Keeping things in perspective is important. Investors fall victim to cognitive biases sometimes, but we can do our best to avoid that type of behavior. With the strong markets seen in 2012, 2013, and 2014, investors are primed for recency bias to cloud their judgement. It’s imperative to remember that even in good years, the market pulls back. Tom and Brendan discuss this on the weekly Mullooly Asset Management podcast.

That’s not to say a 10% pullback MUST occur every year. Averages don’t always work out over the short term. Take the last two years for instance: we didn’t see a 10% pullback from the S&P 500 in 2013 or 2014. Data from the same Dorsey Wright report referenced above shows that precedent exists for this as well. For example, the S&P 500 took 4 1/2 years between 10% pullbacks from March 2003 to November 2007. Additionally, it went from August 1990 to October 1997 without pulling back 10%. Within larger data sets, it’s not uncommon to see outcomes contradict the overall average result. We’ve experienced consecutive years (2013 and 2014) that encapsulate this perfectly. However, we shouldn’t allow our judgment to be clouded by recency bias.

Recency bias can be very detrimental to investment results. After two years without a 10% pullback from the S&P 500, it’s necessary to remind ourselves that we haven’t been experiencing the norm. While we could see this streak continue in 2015, it’s also just as likely that it will come to an end. Markets pull back 5%, 10%, and more even in the midst of up years. If the streak ends and we do see a 10% pullback in 2015, that doesn’t necessarily signal anything ominous as far as the year’s results are concerned. 10% pullbacks regularly occur during very healthy, positive years from the S&P 500. However, the recent lack of them may make the next 10% pullback feel worse than it is.

One thing’s for sure: letting cognitive biases based on recent market action play with our emotions is foolish. This is why we rely on point and figure charting here at Mullooly Asset Management. We use a rules based, emotionless system to manage money for our clients. As Tom likes to say, “When the charts change, we will change”.