There was an article from Business Insider before Thanksgiving about a massive sinkhole that opened up in Manhattan.  The street where the sinkhole opened was one where they would usually inflate balloons for the annual Thanksgiving Day Parade.  The sinkhole opening up was unexpected, but caused quite a bit of damage to the parade’s plan.

I never truly understood sinkholes and where they came from, but this article finally got me interested enough to do a little bit of research. 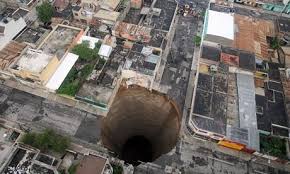 There are a few different types of sinkholes.  The most dangerous one is something called a cover-collapse sinkhole.  The hole beneath the ground is covered to the naked eye, minus a few potential signs.  Under the surface, water dissolves in an underground cavern. The process is a gradual one, but when the sinkhole emerges it can be disastrous for anything on top of it.

Gradually, ground sediments begin to erode, or spall, into the cavern from the bottom. The ground continues to crumble from beneath until only a thin layer remains between the surface and the underground opening. When that layer collapses, the sinkhole opens up suddenly, swallowing any structures on top. – “What Are Sinkholes?” – Live Science

Sinkholes sometimes seem to appear out of nowhere, but there are a few warning signs to keep an eye out for.  Sunken ground, trees leaning to one direction, pavement shifting, are all potential signs of a sinkhole.

It would seem foolish for builders to erect houses, or office buildings, on top of an area that has the potential for a sinkhole wouldn’t it?

The same goes for you and your financial plan!  Stay with me here.

A financial plan is only as good as the foundation it’s built upon.  If the foundation of your plan is faulty, you could essentially be building a house of cards ready to topple over at the first sign of trouble.  If there is a sinkhole underneath your plan, it’s doomed from the start.

Building up your investment accounts, retirement accounts, 401(k)’s at work, 529 plans for your children all seem like GREAT things to do, and they are!  IF YOU’RE READY AND HAVE A GOOD FOUNDATION.

A lot of people, like I alluded to earlier, come into our office and start asking all the wrong questions out of the gate.

Don’t get me wrong, all of these are valid questions, but they need to be asked at the right time.

If you’re cash flows on a monthly basis are out of whack, and you’re running at a net loss each month, does it really matter which ETF you choose in your IRA?

If you’re constantly taking money in and out of your investment accounts to pay for monthly expenses or emergencies, does it really matter how much of a return you’re getting?

It’s hard to answer some of these questions for people when the foundation of their financial situation is in shambles.

When we meet with new potential clients, it’s important to prioritize the building blocks of a successful financial plan before getting started.  We don’t want to start building investment accounts on top of potential sinkholes.

We want to make sure the foundation is solid, with no potential sinkholes brewing underneath the surface.

Once the foundation has been addressed, their monthly cash flows are in order, their debt is being prudently managed, they have a solid emergency fund in the bank, THEN it’s time to start building!

Once we know there is nothing brewing underneath the foundation of the plan, then we can start talking about investment allocations, different investment choices, maximizing your workplace retirement accounts, and making the most of your money.

While many sinkholes are hard to see before it happens, the warning signs are often times there.  The same goes for a “sinkhole” in your financial life.  It’s our job, as investment advisors, to sit down with you and make sure we look for any potential sinkholes that could wipe out your entire financial life.

If you want to make sure there are no potential sinkholes in your financial life, talk to your advisor today!  If you don’t currently have an advisor, we would be happy to help you out!