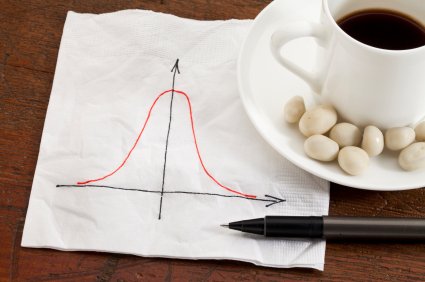 This is a transcription from the November 21, 2012 Mullooly Asset Management podcast.

Brendan: Hello and welcome to the Mullooly Asset Management podcast for November 21, 2012. This is Brendan and today Tom and I are going to talk about using point and figure charts and bell curves.

So I never really thought that I’d be seeing bell curves again after high school, but here we are. So let’s refresh real quick and talk about bell curve concept a little bit.

Tom: Okay. The concept of a bell curve is really pretty simple. You’ve got that curvy part in the middle and two extremes on the right and the left. The whole idea behind a bell curve is to find out where your data is normally sitting. And I’m going to show you some examples of what that looks like when we’re using point and figure charts.

Brendan: Right. So let’s get into what makes bell curves so important to our investing strategy here at Mullooly Asset Management.

Tom: Okay. One of the things you’ve got to know with these bell curves, like we said, that most of the time you’re going to find your chart for a mutual fund or a commodity or a stock or whatever, is going to be hanging around the middle of the curve. In fact, two-thirds of the time, your chart is going to be sitting right around the middle of the bell curve. It’s not over-bought and it’s not over-sold. But what happens is, every now and then, we get these situations where a stock or a mutual fund or some crazy commodity like gold or silver, will get extremely over-bought or extremely over-sold. And that’s really important to know that, you know, that over-bought and over-sold conditions do exist and we’re going to talk about some examples where you just want to make sure that you’re not doing something stupid and buying high or selling at the exact bottom.

Tom: So here’s an example of a bell curve, like we were talking about, you can see how most of the data is centered around the middle of the curve, but you do have these extreme situations where when you get skewed out to the right, you’re in an over-bought condition, a stock, for example, has gone way high and people start calling me saying, “Gee, don’t you think we ought to buy some of that stock?” And I keep telling people, we got to wait 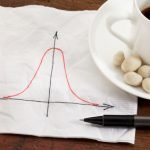 for a pull-back to the middle of the trading band.

On the flip side, you’ll see over on the left, when things get over-sold, a lot of times when selling begins, a panic erupts and people start selling for no good reason and you get this over-sold condition. And so, on the flip side, people say, “Hey, you know, maybe it’s time we get out of that stock,” and I tell them, “Yes, but it’s over-sold right now and we need to pull back to the middle of the trading band to get a better exit point for us.”

Now this is a picture of a bell curve laying flat. Let’s just flip this a little bit and it’ll give you a better idea. So if we were looking at a chart, when we get to the top of the trading band and if you’re a client of mine, you’ve heard me say that before, that phrase, top of the trading band. When you get to the top of the trading band, you want to stop chasing it. It doesn’t necessarily mean you want to sell it, unless you’re a really active trader. But when you get an over-bought condition like that, it’s best to just stop buying and move on to another chart. Wait for this chart to come back to the middle of the band.

Likewise, if you’re thinking about selling something and it gets pushed way down and you get into an over-sold condition, you really want to wait, because, again, two-thirds of the time, things drift toward the middle of the trading band.

Brendan: Right. And we’re going to pull up some charts right now to get a little more in-depth on this.

Brendan: Right. Now, does something being over-bought or over-sold affect the technical story?

Tom: It doesn’t always change the technical story. We use them more for entry and exit points. You know, a lot of times, like I had mentioned earlier, clients will call when they see a stock going up for a few days or a few weeks and there’s talk about it on the news or in the papers about it and people will say, “Gee, don’t you think we ought to buy some?” And I’ll tell them, “You know, it’s already at the top of the— ”

Brendan: At that point, it’s too late.

Tom: Exactly. It’s at the top of the trading band, and so we’re either going to have to just watch that one or we’re going to have to wait for it to pull back to the trading band. On the flip side, on the exit side, if we’re looking for an exit, you know, yeah, we may want to get out of something because the story’s falling apart, but we’ll usually, if something’s had a huge down draft, a lot of times within the next few days or weeks, we’ll get a better price to exit.

The main thing, Brendan, I think we want to remind everybody, that it doesn’t really change the overall technical story. We could have a stock that’s moved from a positive trend to a negative trend. We could have a market that’s changed from offense to defense. We could have relative strength flipping from a buy signal to a sell signal. So there’s a lot of different technical factors that put the whole story together for us. The importance of the bell curve is really to give us a better entry or a better exit point.

Now, it’s important to know that whenever we mention a specific investment, whether it be a stock, a mutual fund, a commodity, or even an index, any time we mention these, it’s not a specific recommendation of Mullooly Asset Management and anything that we’ve mentioned in this video is not a recommendation to buy or sell any of the securities mentioned here.

So again, we say this every week, but if you’re relying on a podcast for investment advice, you’re probably making a huge mistake. And so we strongly urge our listeners to consult with their investment advisor before they make a decision to buy or sell any investment. If you don’t have an investment advisor, of course, you’re free to call us. You can find us on the web at Mullooly.net, that’s M-u-l-l-o-o-l-y.net, or you can call us at 732-223-9000.

Brendan: All right. That’s going to wrap up this week’s podcast, glad that we could talk about bell curves with everybody and we’ll see you all next week on the podcast. Thanks for listening.