January 2018 is a good time to take a quick minute to recap how things are going.  Occasionally it’s smart to make a mental ‘progress report’, so to speak, on where the market is and how people are behaving.

The Fed has been quite possibly the most transparent they’ve been in decades in terms of telegraphing their rate hikes, and other corresponding moves.

Slow and steady rises in interest rates has been the game plan for a while, and that is exactly what we have gotten from the Fed. No surprises.

Meanwhile, rates have risen very gradually and the central bank has never been more open about their moves, telegraphing their actions in a way that watchers of the Greenspan era could only have dreamed of. – Josh Brown – The Reformed Broker

While many stories recently have been about interest rates rising, historically speaking, rates are still at a low level.

Volatility has never been lower.  Major indexes made it through 2017 without a 5% pullback.  That’s the first time in 30 years that feat has been accomplished.

International markets have participated quite nicely too, don’t forget.  Actually, the iShares ETF EFA, which measures developed markets, was up +25.10% (Morningstar) in 2017, and the emerging markets fund EEM was up +37.28% (Morningstar).

Granted, all of these numbers are simply 12-month returns, and in the grand scheme of an investor’s life are extremely short-term.

The general feel of the market right now is ‘cautious optimism’.  Everyday a new analyst is making their claim that this bull market surely has to end in 2018, or that some sort of catastrophic event is coming.

The same thing applies to bull and bear markets.  What ALWAYS must come after a bull market?  A bear market.  We don’t know when, or how long it will last, but it will happen.

One thing my brother Casey noticed this past weekend was the amount of financial institutions running commercials during playoff NFL games and college football games.  You know the commercials.

That New York Life commercial with Lou Bega telling you to buy an income annuity?  Yeah, this one. 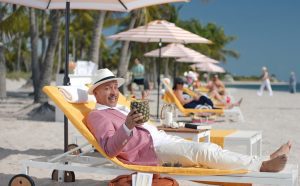 That Northwestern Mutual in your face every single commercial break?  Exactly.

Casey brought up the point of whether or not all of these firms spending loads of advertising money could be some sort of “quasi-indicator” for market cycles.

However, we’ve been in a bull market for roughly a decade, and things in the market, as discussed earlier, are relatively great.  An article from eMarketer in 2016, showed numbers from financial firms increasing their digital advertising spending significantly over the last few years compared to other industries.

How many people do you think would want to buy an income annuity from Lou Bega in a fedora on a beach while their portfolio is down 40% in 2008?  They probably have other things on their mind.

The ridiculousness of some of these commercials you see today are, well, RIDICULOUS.  Individual investors trading options from their phones?!  Is that something that REALLY needs to be done?

There should be some sort of comprehension exam to prove these people understand options trading before they’re allowed to put money into it.

SPEAKING OF RIDICULOUS: Let’s talk about Bitcoin and cryptocurrency.

Everyday you see another company declaring they’re moving into the cryptocurrency space.  Last week it was Kodak and KodakCoin.  I wonder who’s next.

Right now, there are over 40 different cryptocurrencies with at least $1 billion in market cap. That’s outrageous!

We all know what happened to Bitcoin over the last few months, skyrocketing from roughly $1,000 in the beginning of 2017 to above $19,000 at its peak.

It might be a coincidence that virtually unknown securities get so much traction during really GOOD times in the market, but let’s think back to 1999-2000.

Ever hear of Pets.com?  Sure you have, because of how it blew up in people’s faces.

People now refer to that time in the market as the “Dotcom Bubble”.

So many tiny “dotcom” stocks went public, people didn’t understand them, they had no real earnings, no real history or fundamental research behind them, it was all speculation, and people lost A LOT of money.  Sound familiar?

I don’t want to sound all “doom and gloom” here, but what I do want to say is be very careful about the actions you take during this seemingly euphoric time in the market.

Bitcoin and cryptocurrency could turn out to be the next big thing, and stick around for a LONG time.  But just remember, it could also blow up in your face tomorrow.

It’s telling to advisors when we hear people saying they want to own Bitcoin and Ethereum in their portfolios, and they think they can manage these accounts on their own.  Where they get this sense of confidence from is puzzling, but it makes sense after a year where the market went up 20%.

Crazy ideas like cryptocurrency and “dotcom” stocks really seem to come about during good times near the end of bull markets.

Like I said before, this could all be coincidence, and we don’t know for sure when the “top” of the market is going to be placed, but it’s always a good idea to stop, take a mental inventory, and evaluate investors/institutions behaviors during certain times in a market cycle.